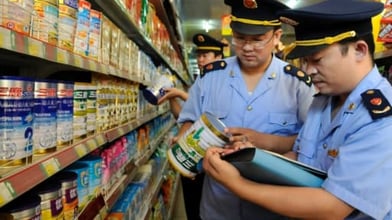 Food safety is an issue regardless of what country you live in.  The ongoing and intense global debate over genetically modified food (GMO) and the unknown impact those foods are having on the long-term health of humans is a prime example.  These genetic modifications are often intended to increase productivity by changing the characteristics of a plant or animal so that they become stronger in some way. That new strength could mean higher yields under certain environmental conditions or it could mean resistance to a pesticide or herbicide needed to kill an infestation.

This may put into perspective your fears about food safety; China doesn’t even allow GMO crops to be grown in China and has only recently allowed GMO crops to be imported for livestock feed. This is at a time globally when the vast majority of corn and soy are already GMO. A recent poll of 50,000 people by China Daily found that 84% of Chinese thought that GMO foods were unsafe.

As a parent moving to China, these stories should illustrate a country and society that has been awoken to the seriousness of food safety issues. Locals are fastidious about soaking and washing vegetables thoroughly to remove chemicals before cooking and a special detergent is even available designed specifically for washing produce.

Additionally, the scandals of the last 10 years in China and the improved purchasing power of the middle class has meant that organic products are gaining significant popularity in China. In Shanghai, the city’s most popular expat supermarket is CityShop has vertically integrated organic farming into their business model. They have also become suppliers of organic produce to top hotels and restaurants in the city.

If you are shopping in expat-oriented supermarkets in Shanghai that specialize in imported goods or in the imported goods section of big supermarkets like Carrefour, then your food safety issues in China will be basically the same as they are at home because you will be consuming the same products.  International schools tend to be sensitive about food safety and while their cafeterias may not be organic, there will be a food safety policy in place that you can inquire about.

If you keep food safety in China in perspective and choose to pay the premium for imported products, you should not be unduly concerned about your time in the Middle Kingdom.