Learning Chinese Before Moving to Shanghai

While it is estimated that approximately 100 million Chinese are fluent in English, that is only about 10% of the population of China and while a fraction of those may be involved in the service or retail industry the vast majority of the people you meet in everyday life will know the word ‘hello’ and little more. This is after decades of English education in public schools and universities as well as countless sums paid in private English lessons to supplement Chinese children’s public education. Private English education is huge in China with only Korea spending more per capita.

Significantly complicating the language barrier issue is that Chinese is a character-based language that, while beautiful to look at, is unintelligible to those who cannot read Chinese. Phonetic languages that use a western alphabet at least provide an intelligible starting point for those people traveling to the country who can then use various apps to translate and begin to learn the languages. The key is that once you learn the Italian word for chicken, you see it spelled on a menu note the differences to English and then the next time you enter the restaurant, you will likely be able to find and understand the word chicken without too much difficulty and then order the chicken. With Chinese, you would need to learn the characters鸡肉 which means chicken meat in Simplified Mandarin. On a menu however, you might see Garlic Chicken with Assorted Vegetables, which would read like this: 大蒜鸡什锦蔬菜. 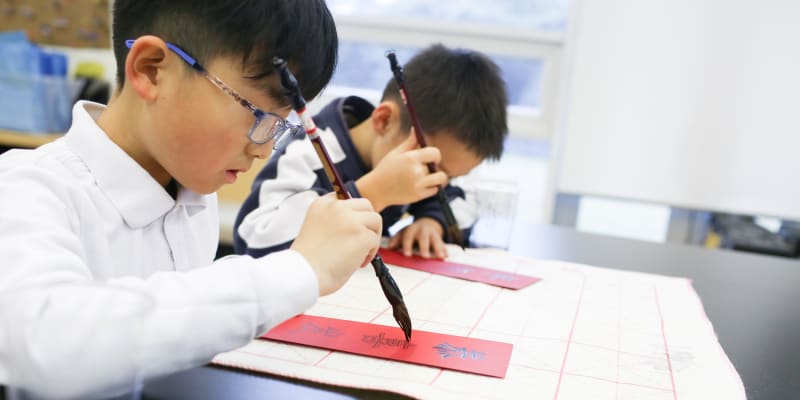 To graduate high school a student must master at least 6600 characters, which are then combined into many more mostly disyllabic words like 鸡肉 or chicken meat.  While estimates from experts vary, it is estimated that to understand an article in a normal Chinese language newspaper, one needs to have a vocabulary of  about 20,000 – 30,000 words. Needless to say this involves years of study.  Depending on your personal skill with languages, you may learn to speak Chinese to the level of near fluency, but it is very rare to meet an expat in China that can actually read Chinese beyond the level of a toddler.  The children of expats are far more likely to be semi proficient in Chinese, as it will be taught in their international school.

For those intrepid expats that have the time and diligence to learn to read Chinese, the world around them in China starts to come to life because the ubiquitous Chinese signage that is everywhere starts to make some sense.  For the Chinese illiterate expat, all the Chinese signage and voices they encounter on a daily basis is simply white noise.  Start to learn the language and that white noise starts to evolve into comprehension.

The first and by far the most important reason to learn Chinese before moving to China is that doing so will help delay the onset of culture shock.  A main contributor to culture shock is the feeling of helplessness that accompanies losing the ability to communicate with people you interact with on a daily basis.  Whether its your ayi (domestic helper) at home, your driver, or the clerk at the supermarket, you will want to have a basic grasp of Chinese before you arrive.  Someone with no real language skills can function relatively well with a vocabulary of about 100 key words like ‘want’, ‘give’ and ‘like’ as well as numbers and pronouns and of course the word ‘thing’ that can be used with a pointed finger to substitute for hundreds of nouns that you may not remember.  So you can say ‘give me three of those things’ or ‘I like that thing’.

Even though Mandarin is a tonal language - meaning the same character can have multiple meanings depending on the tone applied when spoken, by and large Chinese grammar is much simpler than most other languages and is actually relatively easy to speak as listeners will derive the meaning of your words through their context even if you speak the word with the wrong tone.  Locals are used to language barriers as there are more than 200 individual dialects of spoken Chinese.  With all the dialects however, all Chinese people use Simplified Mandarin characters to read and write if they can.  So it is not an uncommon scene to see one person drawing imaginary Chinese characters on their hand to another Chinese person in order to communicate their meaning.  Shanghainese is the main local dialect in Shanghai and it is widely spoken amongst Shanghai natives though it has no written form. Locals will often switch back and forth between Mandarin and Shanghainese to conceal the meaning of what they say in situations where they know that non Shanghainese are present. So don’t be confused when you start understanding some basic Mandarin and you hear something completely different spoken around you.

The key for this first point is that delaying the onset of culture shock is accomplished though a number of measures – maintaining a semblance of self-reliance though learning basic communication skills is one of the most important measures you can take.  The most difficult aspects of dealing with culture shock is that people rarely see it coming.  For most, the reason for this lack of foresight is often that first phase of culture shock called the honeymoon phase, is defined by overwhelmingly positive feelings that mask the frustrations of living in a completely foreign country.

It’s helpful to understand the development of culture shock as ‘straws on a camel’s back’ with recurring frustrations related to language barriers contributing many straws on a daily basis.

Learning to speak some basic Chinese, is made easier by using Pinyin which is a phonetic translation of Mandarin using a standard western alphabet.  This removes the burden of learning characters during oral study though you won’t find it widely used outside the classroom.

Computer programs like Rosetta Stone are largely being replaced by phone apps that allow you to study anywhere and at your own pace. If you take the time to learn before you go, you will be amazed at how gracious locals in China are to you for having to take the time to learn.  You will be met with ‘your Chinese is very good’ by almost any local you choose to speak Chinese to and that same person will follow up with questions in Chinese about where you are from that you may not understand right away, but after a while, you will learn to answer the basic follow up questions in Chinese and suddenly you are having a conversation in Chinese. Locals are invariably interested in speaking in Chinese to any foreigner that will take the time to speak with them, partly out of general curiosity and partly out of hospitality. The upshot is that you have practice partners everywhere. Taxi drivers are particularly chatty like they are in many countries and chatting with them on rides is fascinating once you can talk about more than where you come from.

Initially it is very helpful to learn the phrase “I can only speak a little Chinese’ in order to defuse eager locals that want to engage in deeper conversation following your initiating of a dialogue. It will often be the case that your statement of your lack of skill will be  followed up by an even more complicated question or statement in Chinese that disregards the fact that you just stated you can’t understand what they are saying.  Sort of like the guy who raises his voice at a person who doesn’t speak the language in order to aid in comprehension and with similar results. A simple repetition of the first statement usually results in a smile and a laugh and an ‘ok, ok’ reply.

Your domestic helper is also a great teacher for both you and your family, though it is important to note when you hire them if they speak Mandarin. Most helpers come from rural China and will speak one of the many dialects so if you would prefer your child learn a form of Chinese they will be studying in school from their Ayi, then you need to make sure she can speak it to your children.

While learning Chinese has demonstrable benefits in terms of helping mitigate the effects of culture shock, there is also one highly satisfying side benefit – you will look super sophisticated to your visiting friends and relatives when you speak Chinese. They will have no idea that you just told your taxi driver that you “Want like give thing I don’t speak much Chinese”. He will look totally confused and ask you in Chinese “Do you have mental problems?” to which you will reply in Chinese “Yes, thank you” and you can tell your friends the conversation was about the finer points of Chinese culture… or whatever you like.