Through our investigation of various zoo animals, the children learned about where different animals may be typically found ...and what conditions / habitats that they may prefer to live in.

Here the children have been sorting animals according to various features or similar habitat in an effort to make their own zoo. It was determined that some enclosures needed to have higher fences and be more confined, while other enclosures needed to be larger to allow the animals to run more freely. 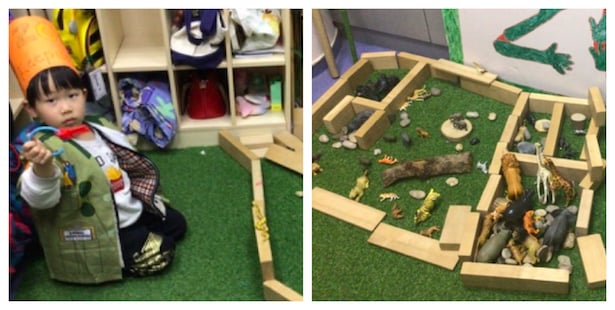 Every Zoo Needs a Zookeeper! Daniel is showing that he has the keys to the animal’s cages. Good Night, Gorilla (Rathmann) and Curious George (Rey and Rey) showed us the importance of keys and maps (below) and we used both of these as part of our math investigations.

With a map in hand, the children explored various routes about our Concordia campus. We used landmark features to determine where we were. We even went to a high vantage point to get a “birds-eye” view of our neighborhood...so as to better understand how a map works. The children went back to our homeroom and used blocks, cars and play people to make their own towns as a basis for their map drawing. 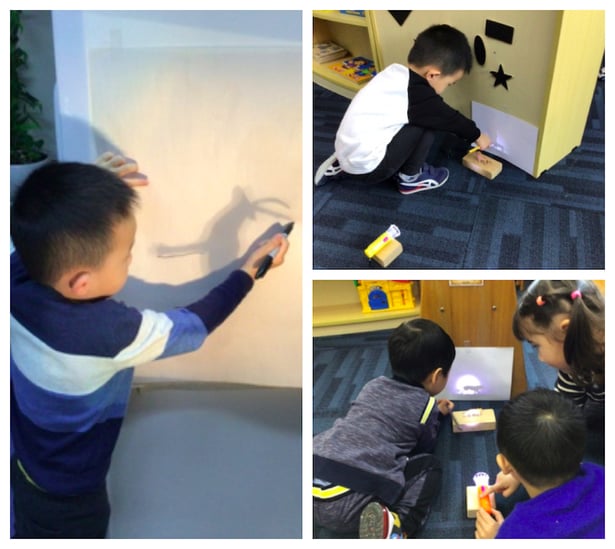 Using the simple technology of a light-source, the children discovered that they could discover the outline of the shadow caused by finding the sharp image of the flashlight placement. The children created and drew around an accurate silhouette of the animal. This delicate fine-motor-control was in contrast to the larger brush-painting pictures that the children had done previously.

The children tore up pieces of paper so as to make animal pictures and they used paper folding practice to make an “envelope shape”. Like in the Dear Zoo book, the children wrote their own letter to the Zoo to ask for a special pet. 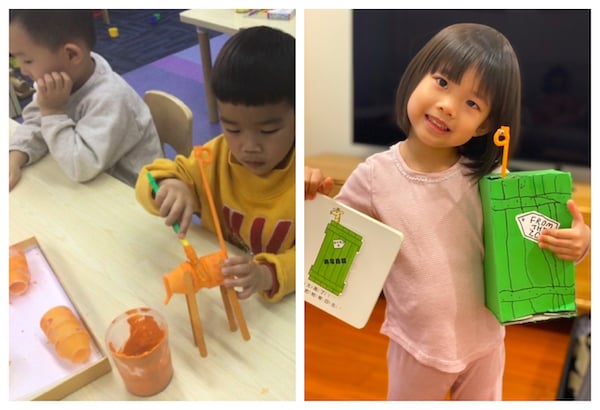 The children were fascinated as to how they could use everyday objects to create an animal character from the Dear Zoo (Campbell) book. Yakault bottles and old tissue boxes were used to construct the packages that the “Zoo” had sent us. Figuring out how to determine the right size of package and create the doors for the animal was a great part of the engineering process.

Ariel: “Look, I have got the same Dear Zoo book at home. I made a model.”

The children were quite familiar of Zoo animals and typical enclosure habitats, we visited an online Zoo and also learned about aspects of the care of animals in captivity. We know that animals eat special types of food and like us, they also need to have a wash.

Our use of magnifying lenses in our investigations enabled us to look more closely at the insects that we found and the plastic toy ones we have in class. We drew some tiny pictures to show what we observed. 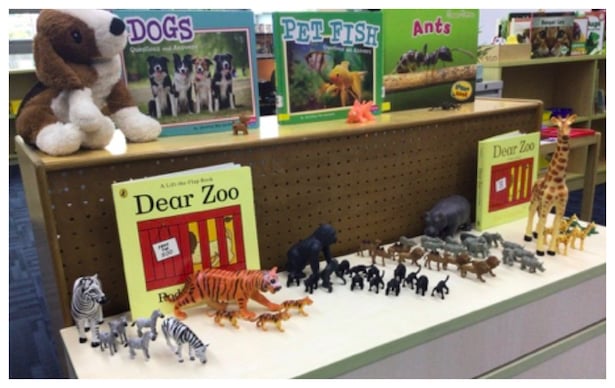 Further examples of math learning, was observed through the children’s sorting and classifying of animal play manipulatives...some of the groupings included: color, species, family, etc. 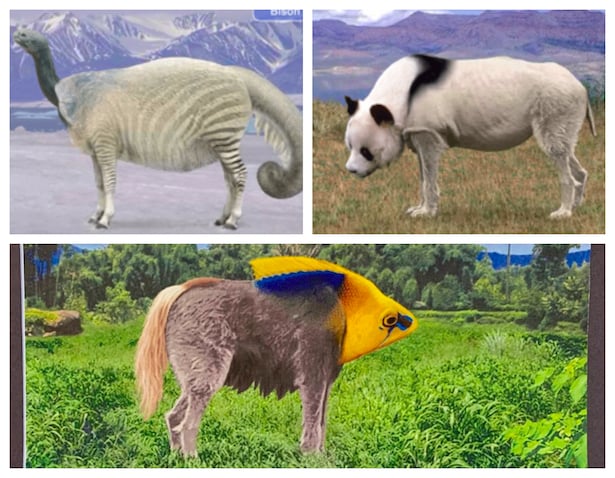 Imagine being able to create your own animal! Exploring technology through the switchzoo.com program on the iPad, Isaac was able to use his imagination to combine various features of animals to create his own unique animal. 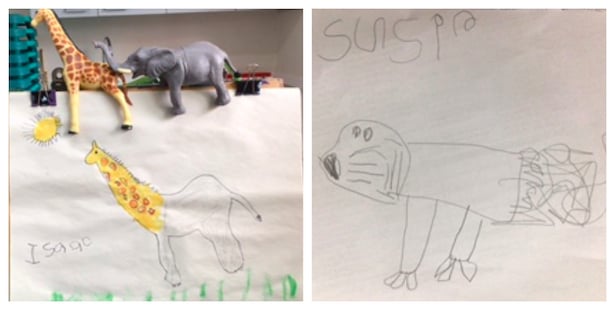 Isaac loves giraffes as well as elephants. Isaac selected these two toy animals and combined the features of both to make a large easel picture! He decided it needed to live on the grasslands. Susie used the switchzoo picture she had created as the basis for her artwork. Now she just has to name it and consider what it is going to eat and where it can live! Can you help her?